Short answer: calcium, magnesium, sodium, potassium, and hopefully not a whole lot else.

Water gets discussed in the tea scene often enough, but I suspect that most people worry about it a lot when they’re brand-new, and proceed to forget about it shortly after.

If you’re lucky, you’re like Sean and have glacial run-off on tap that barely warrants a Brita filter.  For the rest of we mere mortals, it’s necessary to use quality filtration to remove contaminants, or purchase bottled water

Municipal water (whatever comes out of your tap) can range from terrible to excellent, and generally hovers around  is often treated with charcoal, charcoal-based filters, or multi-cartridge reverse-osmosis under-sink units that strip it back to pure(ish) water before adding back some desirable minerals.  In most cases this will result in water that is serviceable, though not ideal.

Per the FDA, there are three broad categories of bottled water in the US which we care about in addition to municipal water:

A regular teafriend has commented that tea at my house has noticeably more complexity and clarity of flavour than at his own, but at the cost of body, richness of flavour, and overall satisfaction as a drinking experience. I’d tend to agree – there’s a sharpness that makes the water pleasant to drink in isolation, but which tends to present in the brewed tea as well and harshen it.

For most of my two-year tea-life, I’ve defaulted to Kirkland Purified water (5ppm TDS), not because I thought it was good but because I felt it wasn’t bad, which was sufficient given that it’s cheap and readily available to me. Buying by the gallon rubs me the wrong way, but less than buying from Nestle would, even if Pure Life makes decent tea.

At the recommendation of another teafriend, I tried Crystal Geyser spring water (110-120ppm TDS, from the Mt Shasta spring IIRC). I found that this water produced pu’er that was smoother and noticeably more-saturated in colour (though I can’t imagine why), but pitifully-lacking in potency of flavour and aroma. Back to Kirkland I went, via a handful of other inconclusively-tested options.

Most recently, I’ve tried Kroger’s Palomar Mtn spring water (also 110-120ppm TDS), and the results have been fantastic – the “sharper” Kirkland brews replaced by tea which is smooth, round and silky, yet as potent as it ever was with the old water.

Of course, the tetsubin probably helps. As the less-prolific teaware-twin, I’ll leave a proper kettle-post to Sean, but suffice it to say that I’ve found that water boiled in my tetsubin produces tea that simultaneously possesses a silkier mouthfeel and a more-penetrating quality which can accentuate bitterness, astringency, and “activity” on the tongue, for better or worse. With Kirkland water this is a double-edged sword, as tea can become harsh at the slightest hint of inattentive brewing. With the Kroger’s spring water, there’s little downside.

If you’re skeptical of the difference between one water and another, here’s a visual. The left photo shows my tetsubin looking brand-new after about four months of daily use with 5ppm water, the right is how it looks after three days of ~110ppm. 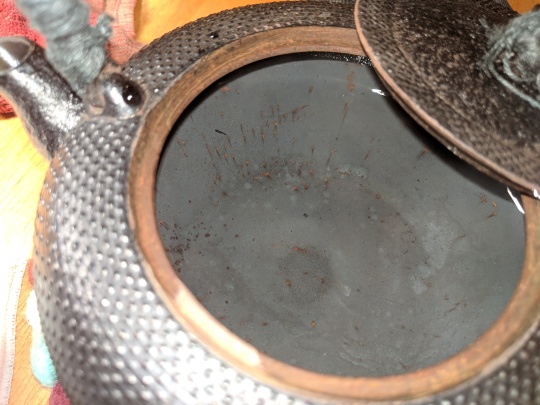 Marginally interesting, but what does this mean, and why am I bothering to write a post about it?

As with so many other aspects of tea, I’ve come to believe that finding a good water (for your tea, teaware and brewing style) is a critical component of gongfucha, not just the bailiwick of obsessives who enjoy fussing over tea as much as enjoying tea itself. Those who’ve kept up with my posts will notice a recurring theme…

When I first started messing around with the nuances of water, I lacked the experience to deal with them intelligently. I didn’t know my teas and process intimately enough to determine anything more than what was “terrible” and “not terrible”. Now, with a much better idea of how my favorite teas should behave, I’m in a better position to judge how a particular water or piece of teaware is affecting the presentation of teas relative to what I’m used to.

To that end, here’s my advice to other neophytes:

I know that a lot of people view water selection (beyond making sure it’s not compete crap) as overly fussy – I used to be one of those people – but using sub-par water with expensive tea is false economy in my humble opinion. As demonstrated by my distaste for Crystal Geyser, there’s far more to it than picking a water with a sane TDS, and for me the difference between Kirkland/CG and Kroger Spring is easily equivalent to (for example) 10c/g put toward better tea, so I think anyone who’s spending decent money on tea owes it to themselves to see if they can get more out of the leaf.